The Geekiest Lamp in All of Geekdom

So, today's crafty post. I had this floor lamp that I loved very much, but some of the panels had been damaged over the years, so I decided to cut all the panels out, replace the ones that were too badly ripped and salvage the ones that weren't. Maybe I'd add some small embellishments, I thought. Then it turned into an epic stencil project that took up all my crafts-for-me time throughout January and February. And then I discovered that it's really hard to take pictures of an item that is itself a source of light. Especially since when the lamp is off (or I tried to use the camera flash) you can't actually see any of the designs - it just looks like panels of plain paper. So this post has taken quite a while to get organised!

Because it's for me, it's a bit messy in places and I tried some techniques that I won't try again. But I actually quite like how it turned out, overall. I'm definitely going to try to use some of these ideas again for smaller table lamps I can sell, but that'll require quite a lot of research and planning!

The biggest problem I had with taking photos was the difference between the Bat signal panels and the other ones. With the naked eye there isn't as big a contrast as there are in these pics. 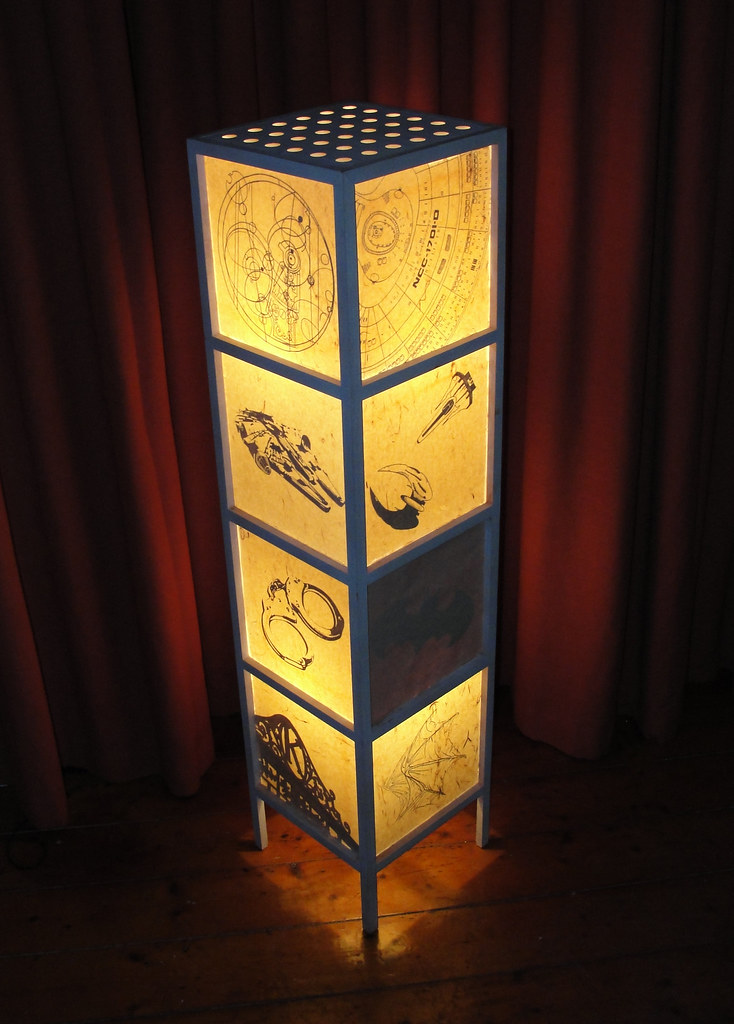 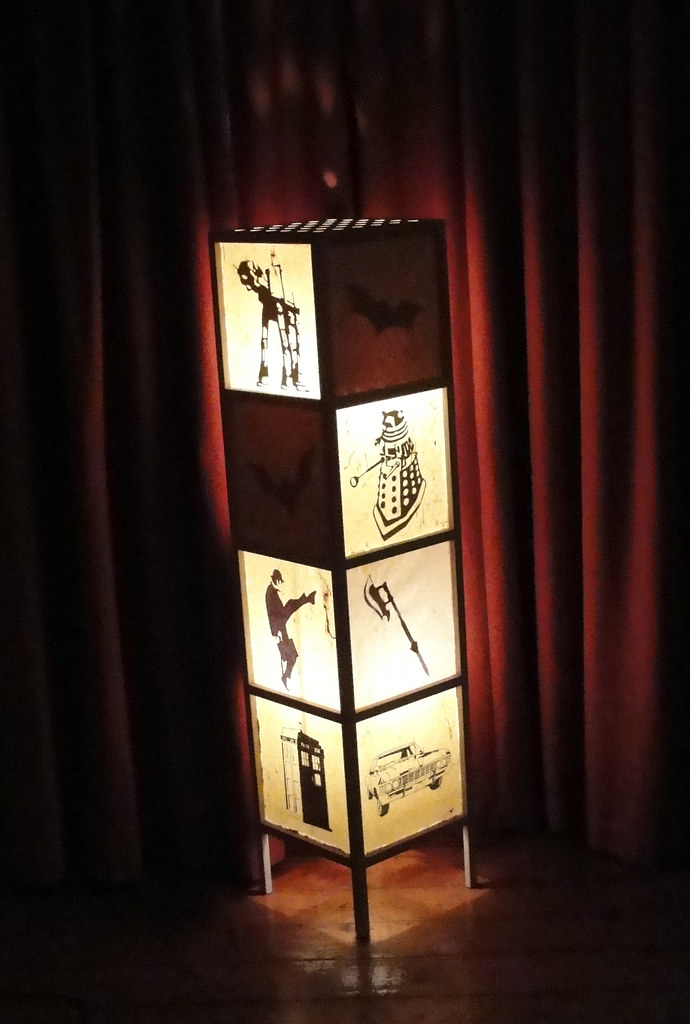 Some of the panels are paper stencils, and some of them are drawn on the back with a Sharpie. The paper cut outs definitely look best for the blockier designs, but I couldn't even imagine trying to cut out something like the Gallifreyan symbols. 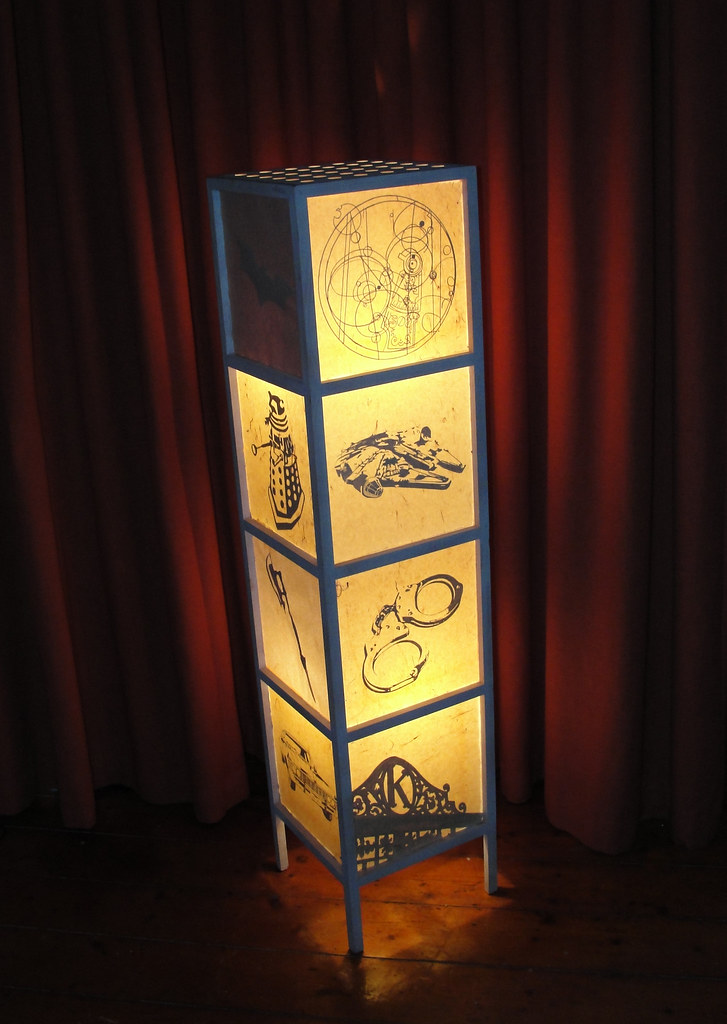 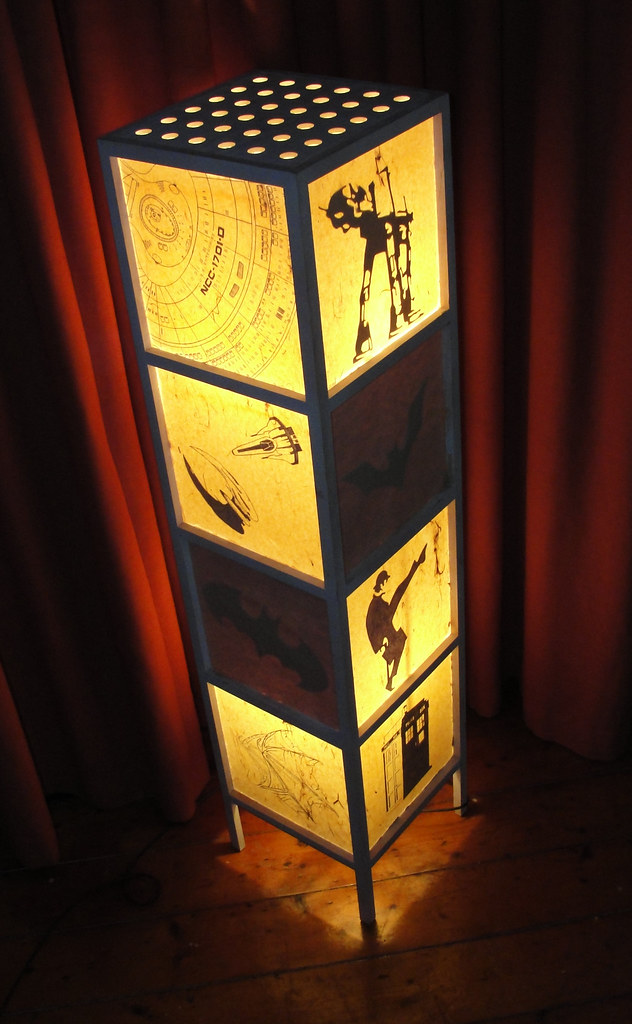 These close ups show the Bat signal panels a little more how they actually look than in the pics of the whole lamp. 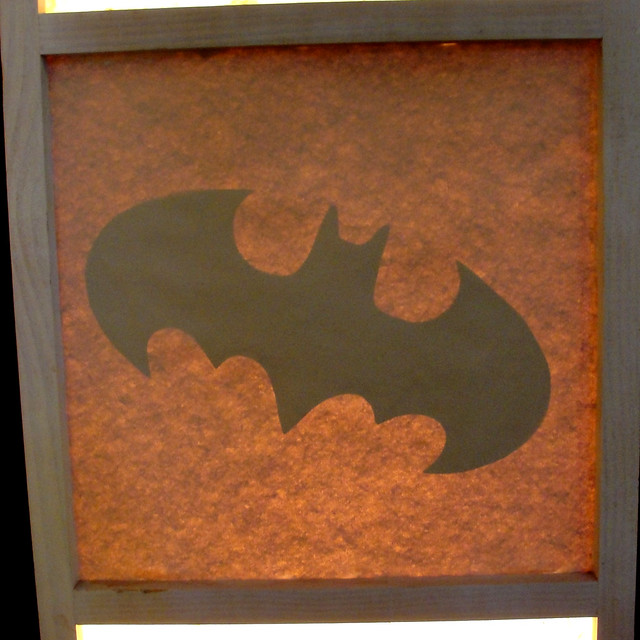 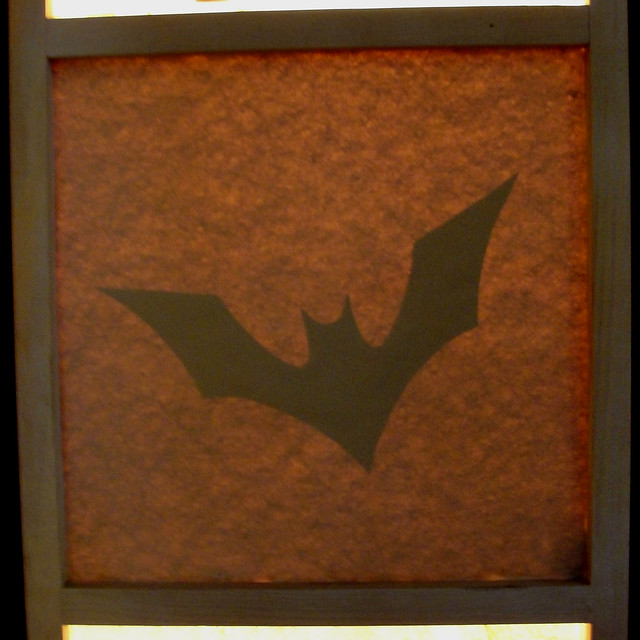 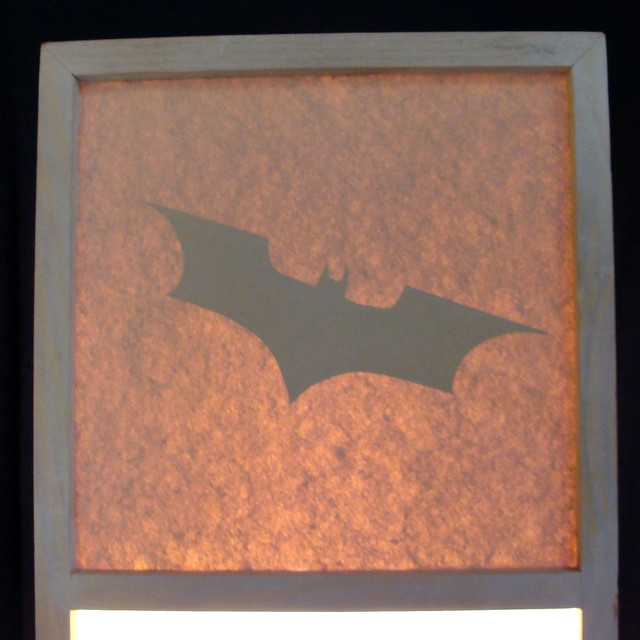 The Millennium Falcon took for-bloody-ever to do but I finally like how it came out. 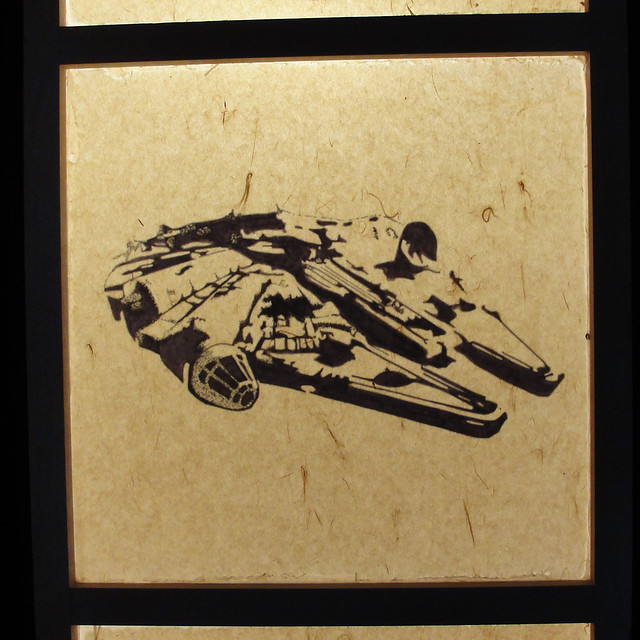 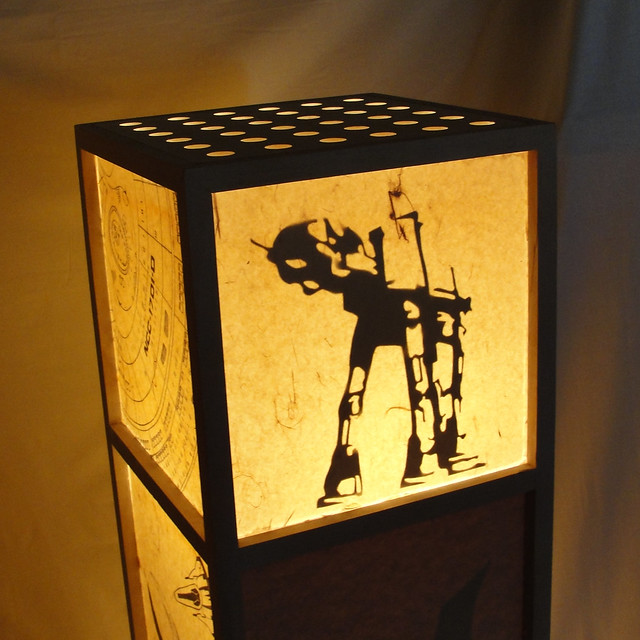 I didn't mean to do three Doctor Who panels but I got a bit carried away! 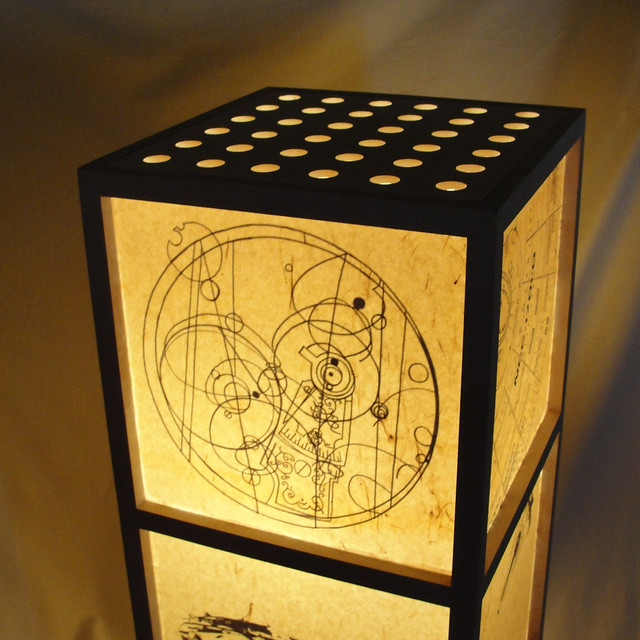 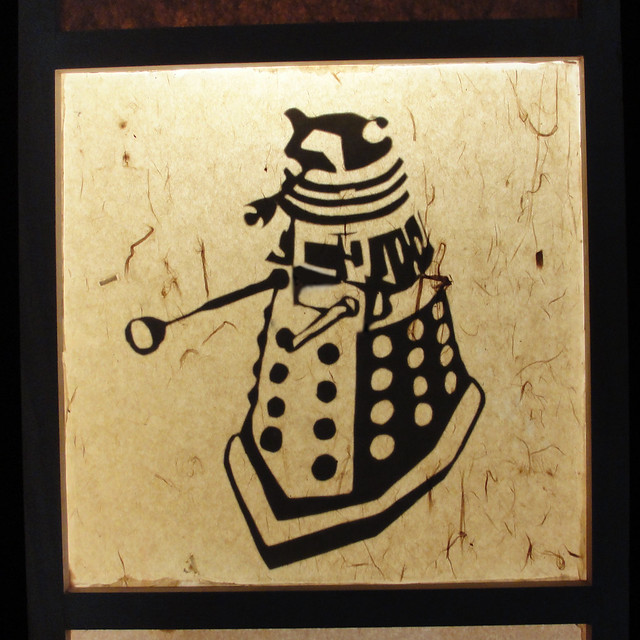 I'm not entirely happy with how the Tardis turned out. The lettering isn't neat enough and you can see my pen strokes in the supposedly block colour areas. But I think I could do that better if I tried it again. 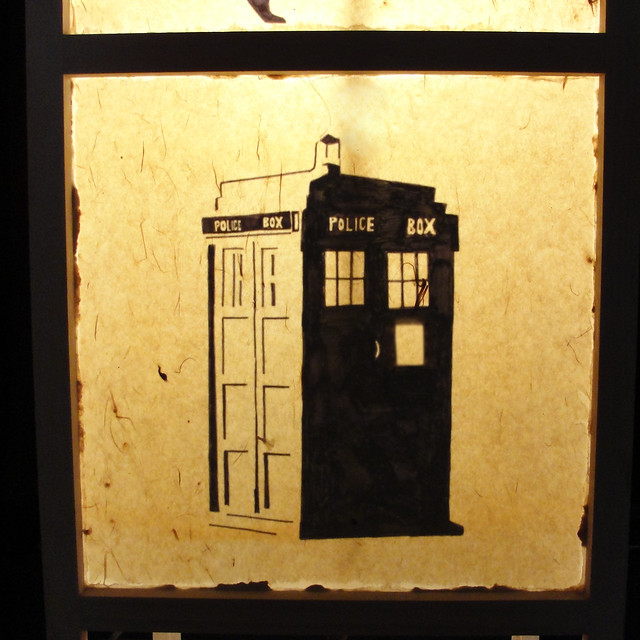 This panel is of the gates of Xanadu, from Citizen Kane. I am spectacularly obsessed with that movie. 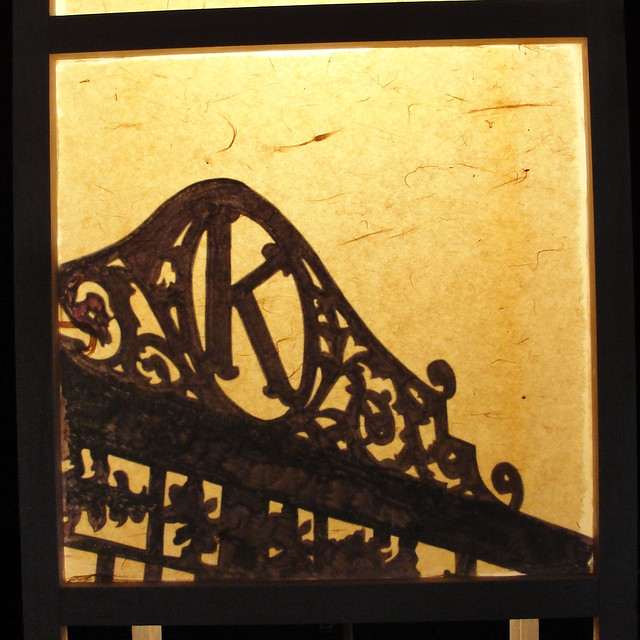 This is meant to be a pair of dragon wings, but I think it just ends up looking like a bunch of squiggles. Oh well. I'm not gonna moan about any of the other panels from here on out! 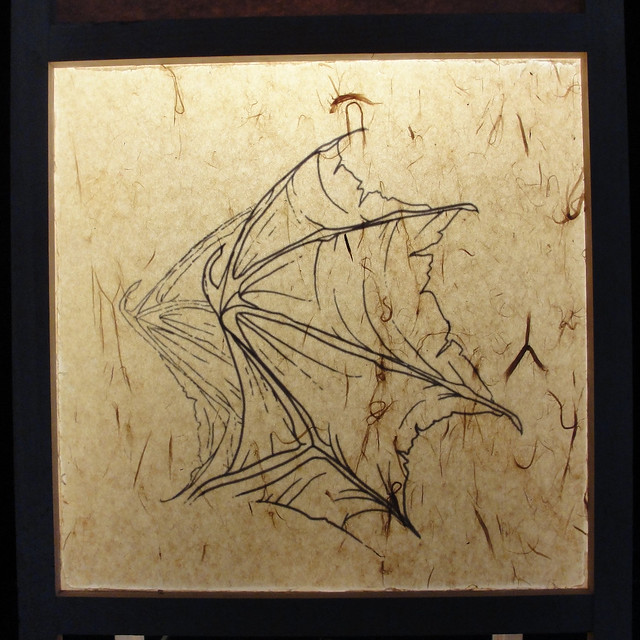 I quite like how the Viper turned out, but that Cylon raider looks pretty fantastic if I do say so myself! 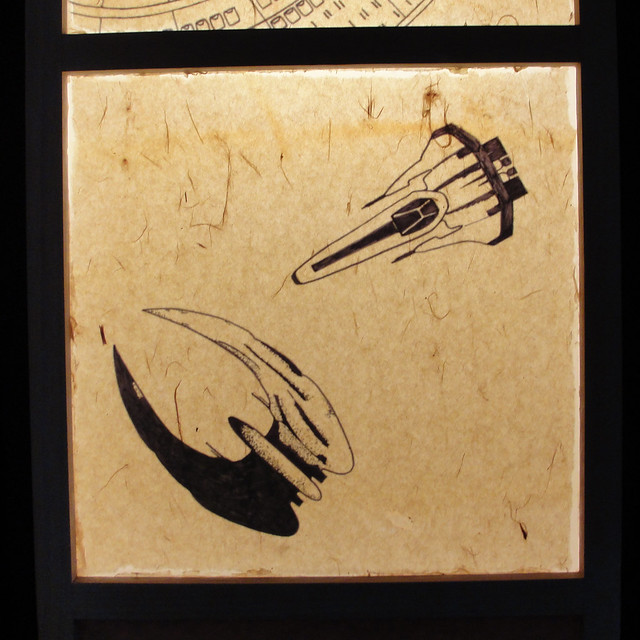 Another one I kinda wish I'd done as a paper stencil rather than drawn, but hey, I have a Monty Python panel on my lamp of awesome so all is well! 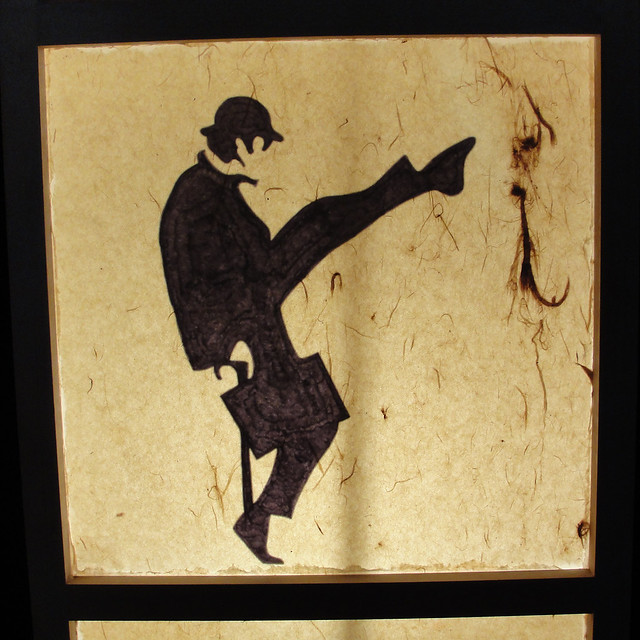 An attempt to use a printed paper stencil to give various shades of gray. Didn't work out exactly as planned but I do like how it looks. 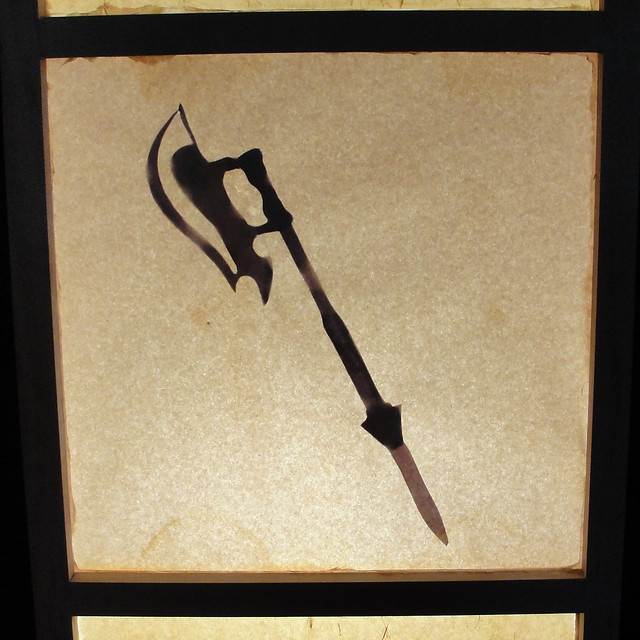 The Metallicar is another one that took a long time to complete, but I absolutely love how it turned out. 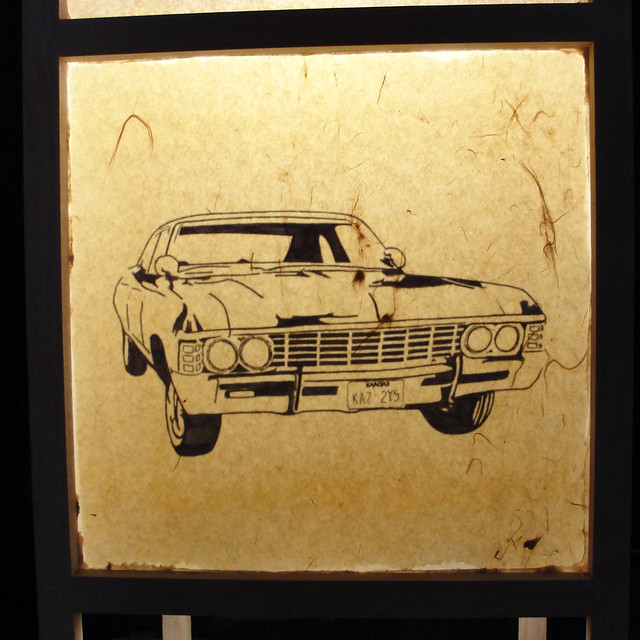 I wanted one of the panels to represent The Wire and the first thing that jumped to my mind was Kima's "and then he dropped the bracelets" so I had to do handcuffs. If it wasn't for the last panel I think this one would be my favourite. 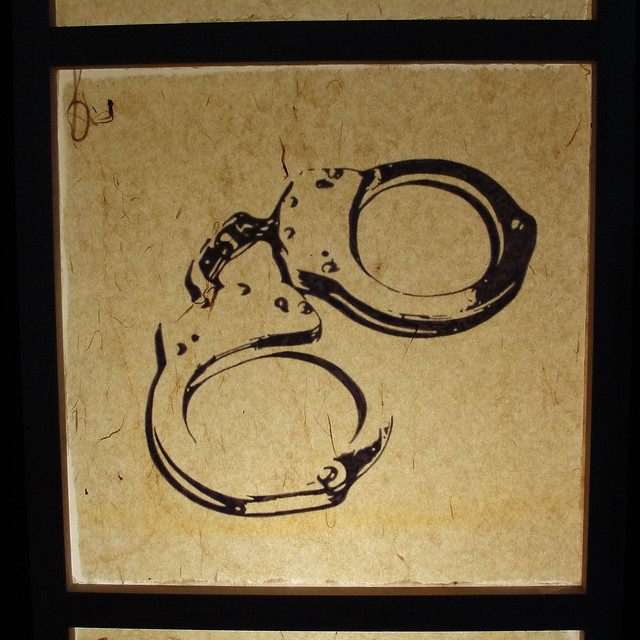 You're getting three pics of this one because I absolutely adore how it looks. A friend lent me his Enterprise D blueprints (which, by the way, is one of the nerdiest awesomest things ever) and so I simplified a section of the top of the saucer bit thing. (I really ought to know what the technical term for that section is given the amount of time I've spent poring over those blueprints!) At some point soon I'm definitely going to make a whole lamp composed of bits of those blueprints. Probably highlights like the bridge and Picard's quarters and stuff like that. 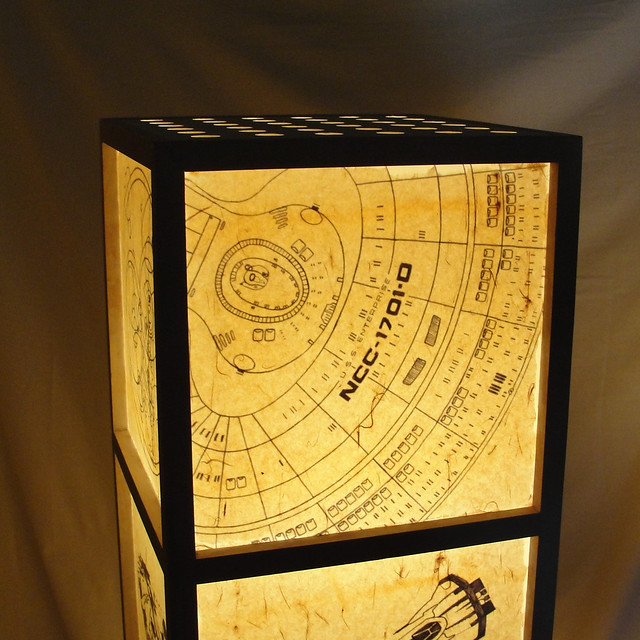 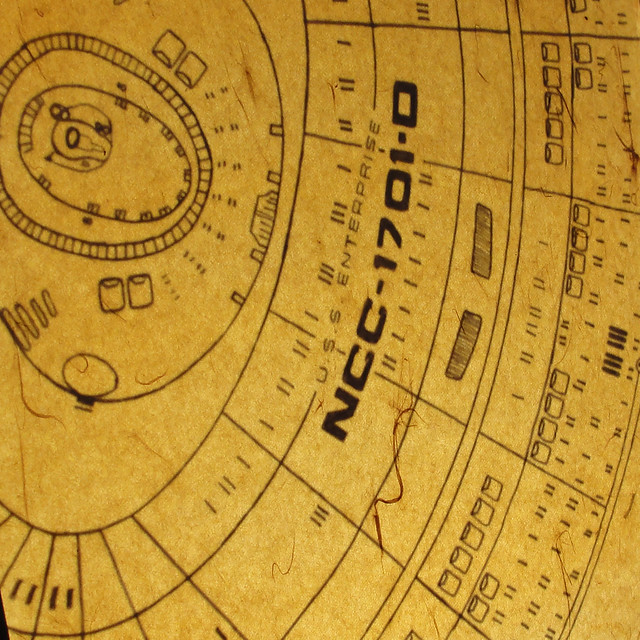 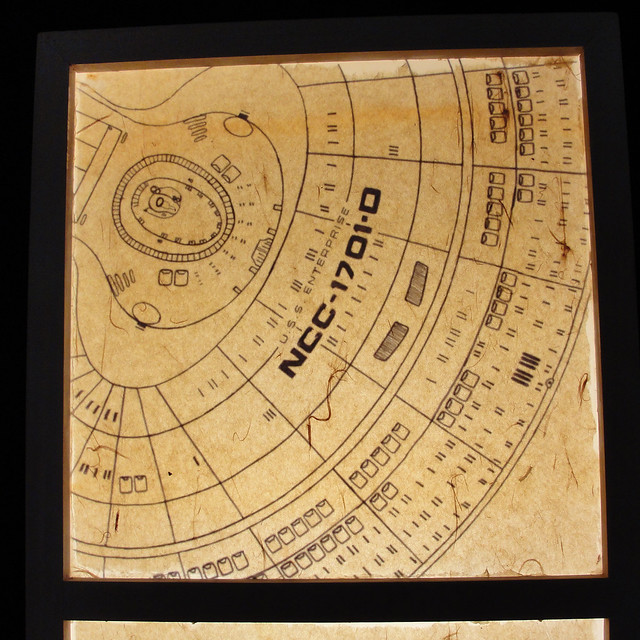